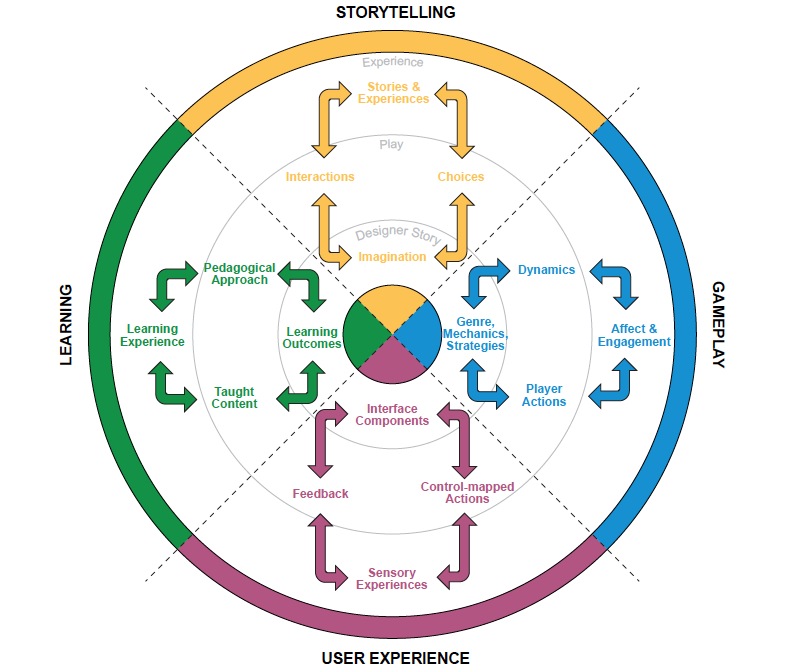 Changes to Teaching in a Digital Age

For the former Chapter 7 (now Chapter 8), on Pedagogical differences between media, I am adding a new section in three parts on emerging media, in particular serious games, virtual/augmented/mixed reality, and artificial intelligence.

This is my draft on the introduction to the new section and the part on serious games. I am indebted to Naza Djafarova and her team in Digital Education Strategies at the G. Raymond Chang School of Continuing Education, Ryerson University, for their major contribution to this chapter. However, further suggestions, criticisms and constructive feedback will be truly appreciated.

The book will be published in time for Contact North’s Global Online Summit that takes place in Toronto between October 8-10 this year.

8.7.1 The challenge of emerging technologies

It is not uncommon for a school principal, a college VP Education, or a university president to go to a conference and come back thrilled about the potential of the latest technology for teaching and learning. They are victims of what the consulting firm Gartner calls the hype cycle.

A new technology triggers excitement, the media picks up on it, the technology reaches a peak of inflated expectations, it starts to get more widely applied, disillusionment sinks in when faced with the realities of implementation, then the technology starts to find its niche as better understanding of its strengths and weaknesses emerge, eventually reaching a plateau of productivity, where it works well within its limits. MOOCs are an excellent example of this, with most knowledgeable observers in 2019 placing them towards the top of the slope of enlightenment or just emerging on to the plateau of productivity (see, for instance, Web Courseworks, 2018).

New technologies that have educational applications are constantly emerging. For instance in the first edition of this book (written in 2015) there was no extensive discussion of artificial intelligence, virtual reality or serious games, yet four years later they are now at the forefront of many discussions about the future of digital learning, which is why this section has been added. There are several other technologies that could be included, but many of these will be subsumed under artificial intelligence.

I will not be able to go into depth about any of these three technologies (each deserves its own book), but they are significant enough to bring them to your attention. Once again, I will focus on their potential affordances, although it must be recognised that with all emerging technology, it may take time to identify all their advantages and disadvantages.

Gartner’s hype cycle is best considered as a way of thinking about emerging technologies, rather than as a factual representation of their development. For instance, serious games are more of a slow burner. There have never been vastly inflated expectations about their likely impact on education; indeed for a long time they have been written off as too expensive or not appropriate for serious education. However, that view has been changing in recent years.

There are several different definitions of serious games. I have included two definitions that cover both educational and corporate settings.

Serious games are games designed for a purpose beyond pure entertainment. They use the motivation levers of game design – such as competition, curiosity, collaboration, individual challenge – and game media, including board games through physical representation or video games, through avatars and 3D immersion, to enhance the motivation of participants to engage in complex or boring tasks. Serious games are therefore used in a variety of professional situations such as education, training,  assessment, recruitment, knowledge management, innovation and scientific research.

Zhonggen (2019) provides this definition in his comprehensive review of the research on serious games:

Serious games are referred to as entertaining tools with a purpose of education, where players cultivate their knowledge and practice their skills through overcoming numerous hindrances during gaming.

It is important to distinguish between serious games, game-based learning and gamification because of the differences in their purpose, approach and impact on learning.

Note that serious games are not necessarily digital. However, whether digital or not, they are governed by similar principles of design, such as mechanics, dynamics and aesthetics (Hunicke et al., 2004).

The main reasons offered for using games in education are to:

However, an extensive review of the literature conducted by Dichev and Dicheva in 2017 found that research remains inconclusive on these assumptions. They also found that:

Dichev and Dicheva do conclude though that their study does not mean that gamification cannot be used successfully in a learning context; rather better designs and more research are needed.

Zhonggen (2019) found among the ‘ huge number of findings in serious game assisted learning, most …are supportive, coupled with a few negative results.’ However, the main benefits tended to be in the affective domain (student ‘happiness’ and improved social learning and communication) rather than in immediately  improved cognitive learning outcomes, except in science (improved retention and holistic understanding), architecture and medicine/health. In the latter, games helped children with autism to learn. Zhonggen reports:

As a result of this prior research, under the leadership of Naza Djafarova, the Digital Education Strategies team at the G. Raymond Chang School for Continuing Education at Ryerson University developed a practical design guide (2018) for serious game-based learning, based on a games research process. This guide is an open educational resource and is designed to serve two purposes:

The methodology is an adaptation of the Design, Play, and Experience (DPE) Framework, developed by Winn (2009). The game development process consists of three phases:

The Digital Education Strategies study suggests a workshop approach to serious games design, in which all the key stakeholders (content experts, instructional designers, media producers, etc.) are involved. Brainstorming in the early stages of design is considered essential. Also built into the design is testing and user feedback before releasing the game.

Zhonggen (2018) highlighted the importance of the following in effective games design:

There are probably other effective design approaches, but the above approach highlights the essential multi-disciplinary approach of serious games design.

8.7.2.4 Examples of serious games and gamification

The Digital Education Strategies team (DES) at Ryerson University has participated in the development of several virtual games simulations including:

Games-based learning: Ryerson University’s Academic Integrity office, in collaboration with DES, developed a digital learning game called Academic Integrity in Space to motivate students to complete self-study training and to learn about the academic integrity, values and behaviours expected of students. The game development team’s objectives were to create a well-designed digital game to meet the learning objectives of making choices, learning by doing, and experiencing situations first-hand, through role-playing. 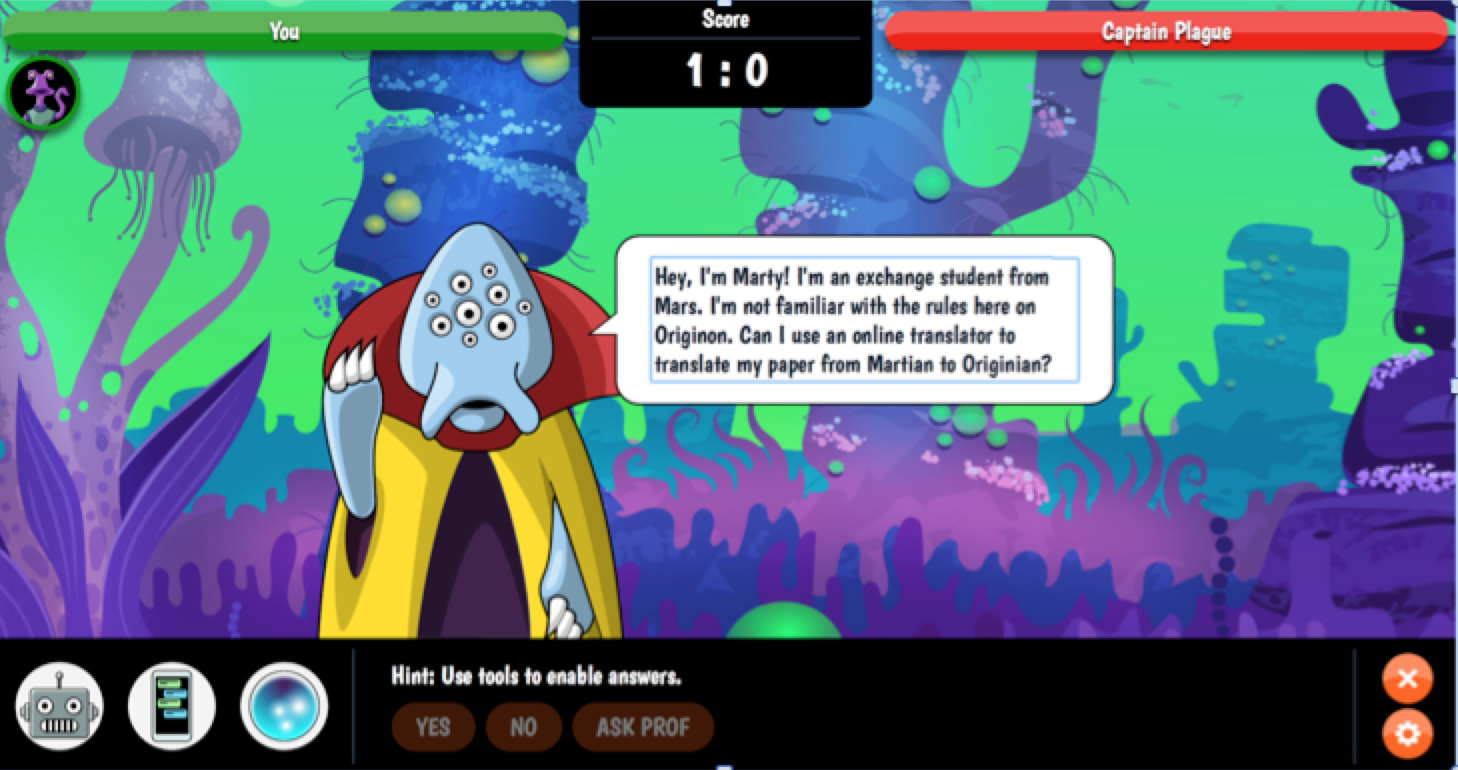 Gamification: Kyle Geske, an instructor at Red River College, Winnipeg, has developed a games-based approach to teaching web design. In his elective course on Full Stack Development of web sites, students have to design a project according to principles provided by the instructor. At each stage of the design process within the project students gain marks, and compete throughout the course with other students, who can see the marks at each stage for all the other students. A student can ‘level up’ their mark by going back and improving on each of the steps of the design. This approach has resulted in an increase in the average end of course grade compared to the more traditional classroom methods. Note this course involves elements of gaming, such as competition, and ‘levelling up’, without using games themselves.

These still need to be clearly identified and validated, but two rather different claims are made for serious games:

within specific contexts that approximate to the real world.

In terms of the hype cycle, serious games are somewhere along the slope of enlightenment. There is not the research yet to move them into the plateau of productivity, but there is enough evidence from practice that they are gaining traction in education.

However, there are a number of reasons why serious games have not become more prevalent in education. The first is philosophical. There is resistance to the idea of games because some see serious games as an oxymoron. How can a game be serious? Many instructors fear that learning could easily be trivialised through games or that games can cover only a very limited part of what learning should be about – it can’t all be fun; that is not the purpose of education. Similarly, many professional game designers are not interested in developing serious games because they fear that if the primary goal is learning and not enjoyment, a focus on education risks killing the main element of a game: being fun to play.

A more pragmatic reason is cost and quality. The assumed high cost of video games has so far acted as a deterrent in education. There is no obvious business plan to justify the investment. The best selling video games for entertainment for instance cost millions of dollars to produce, on a scale similar to mainstream movies. If games are produced cheaply, won’t the quality – in terms of production standards, narrative/plot, visuals, and learner engagement – suffer, thus making them unattractive for learners?

However, probably the main reason serious games are not more prevalent in education is that most educators simply do not know enough about serious games: what exists, how they can be used, nor how to design them. Experience suggests that there are many possible and realistic applications for serious games in education. There is some evidence (see for instance, Arnab, 2014) that effective serious games can be developed without spending large amounts of money.

Nevertheless, there is always a high degree of risk in serious games design. There is no sure way of predicting in advance that a new game will be successful. Some low-cost simple games can work well; some expensively produced games can easily flop. This means careful testing and feedback during development. So serious games should be more seriously considered for teaching in a digital age – but their application needs to be done carefully and professionally.

Thus serious games are a relatively high risk, high return activity for teaching in a digital age. Success in serious games means building on best practices in games design, both within and outside education, sharing costs and experience, and collaboration between institutions and games development teams. However, as teaching in a digital age moves more and more towards high-level skills development, experiential learning, and problem-solving in real world contexts, serious games are bound to play an increasingly important role.

To be added: an activity plus feedback in the form of a podcast.

Dichev, C. and Dicheva, D. (2017) Gamifying education: what is known, what is believed and what remains uncertain: a critical review International Journal of Educational Technology in Higher Education, Vol. 14, No. 9

Zhonggen, Y. (2019) A Meta-Analysis of Use of Serious Games in Education over a Decade, International Journal of Computer Games Technology, vol. 2019, Article ID 4797032